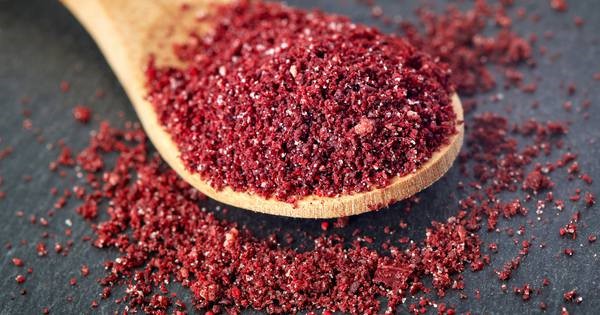 Rhus coriaria Linn. (Anacardiacea), commonly known as sumac, has been used as a spice and souring agent for centuries. Sumac is a tangy spice with a acidic flavor reminiscent of lemon juice. Sumac comes from the berries of a wild bush that is native to temperate and subtropical zones. It grows wild in parts of the Middle East, notably Iran. The berries are dried and crushed to form a coarse red powder. The whole fruit appears in dense clusters.

Cultivation and Uses of sumac

Sumac is easily propagated by seed. It grows best in poor soils. The plants are also grown as soil binders and cover plants.  A bushy shrub has light gray or reddish stems. The leaves are hairy and in autumn turn to a bright red.

Sumacs have been used as a source of medicines, and beverages. Sumac is used widely in cookery in Iran, Turkey, Arabia, and especially in Lebanese cuisine. It is a major souring agent rubbed on to kebabs before grilling and may be used with fish or chicken.

Sumacs have been used as a source of dyes. The role of plant in leather and textile industry as tanning agent and as a coloring agent is significant.

Iranian sumac (Rhus coriaria), has long been used as a food spice and condiment in many Middle-Eastern countries. The distribution of the plant is mostly on foothills of many parts of northern Iran, such as Qazvin, Azerbyjan, Albourz and Khorasan. Studies proved that Iranian sumac which is traditionally used as astringent agent have promising inhibitory effects on food-borne bacteria and could be considered as natural food preservatives.

In traditional system of medicine, this plant has been used in the treatment of wounds, liver disease, diarrhea, dysentery, sore throat, poison, and pain. The berries are used for reducing fever. Sumac is one of the most powerful anti-inflammatory spices. It is a good source of antioxidants that prevent cancer and heart diseases. Researches have shown that daily intake of sumac for will lower the risk of cardiovascular disease among people with type 2 diabetes.

Sumac is commonly used as a garnish, to add slight acidity to a dish. Some beekeepers use sumac bobs as a fuel for their smokers. They were commonly used as pipe stems in the United States. Dried sumac wood fluoresces under ultraviolet radiation.

Poison sumac (Toxicodendron vernix) is a shrub that can grow as tall as 30 feet. One of its defining characteristics is the red color of its stem.  Poison sumac Toxicity makes it unadvisable for consumption. In poison sumac all parts contain a resin called urushiol. The most common symptom from contact with the plant is a painful skin rash. Even inhalation of poison sumac can cause inflammation and fluid accumulation in the lungs, which can be fatal. Ingesting the plant can cause inflammation in your gastrointestinal tract. There are several symptoms of poison sumac toxicity, including: Itchy rash, swelling, Blisters, Redness, and fever. The symptoms appear between 10 and 48 hours after contact with the plant.